Oooh! You could check out her artworks or read through some of her random "brain farts."

One of the first paintings I did featured a profile of a woman holding onto a three-tiered clay pot stack. It is the worst piece in every possible way you put it. From that experience, I vowed never to focus on faces again since I thought it was impossible for me to transition from cartooning to creating almost real human faces.

In 2014, the year when I tried using watercolor, I could still remember that moment when I nearly crumpled the artwork to move on with another medium or to do something other than art in my life perchance. Truly, it is very vivid in my memory that I once gave up on myself after that single failure to please my taste in an output. 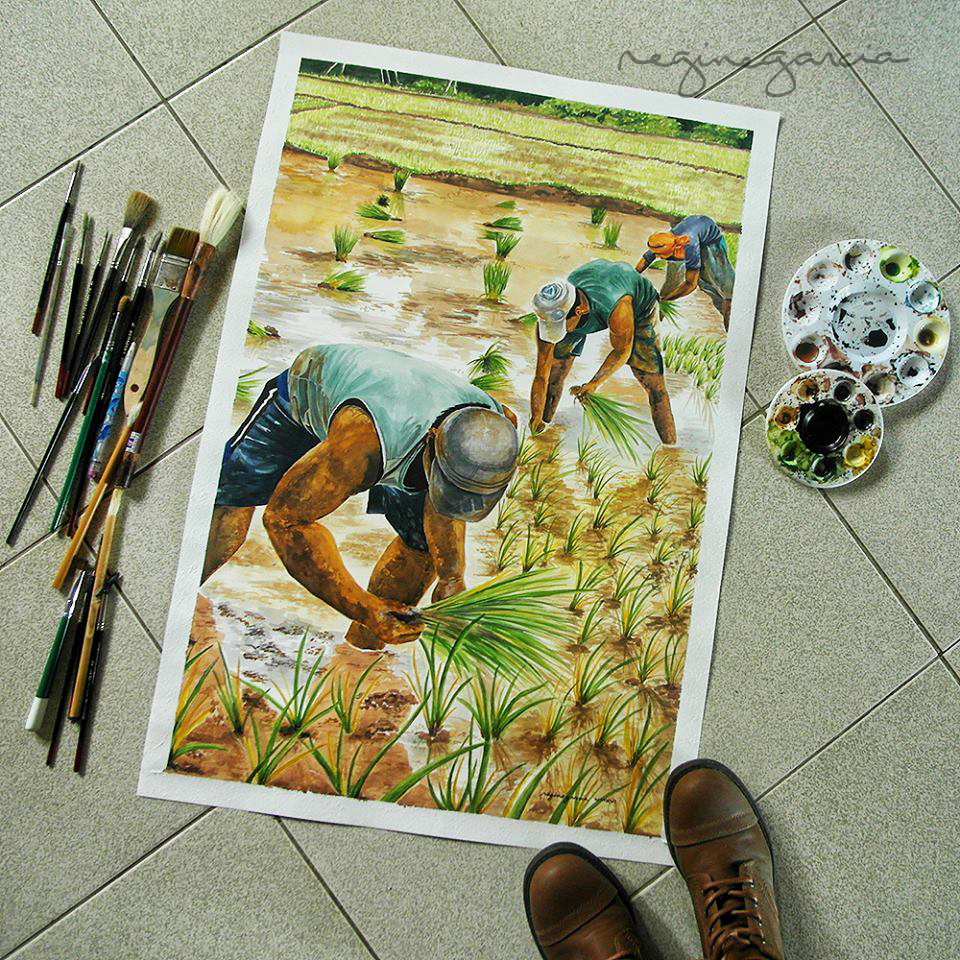 It is frustrating to impose high standards on yourself especially if you’re still at the infancy of learning the medium. I closely abandoned watercolor all due to those constant discontentment.

Years have passed, I continued doing watercolor, hopping from one artwork to the next and getting more dissatisfaction from the unpredictable medium. I forced myself to learn at my own pace and at my own expense of trial and errors. And yet, given the huge time frame for possible practice, I still abhor portraits. 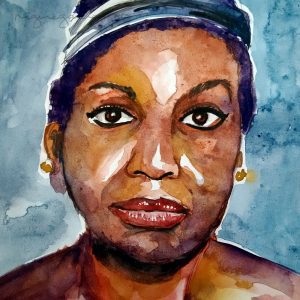 (9in x 9in; watercolor on vellum) Experimental portrait of Nina Simone embodying a “cartoony” effect.

It is evident in my previous works that my relationship with painting faces is extremely rocky. I tend to pull people’s faces far from the foreground and only pick up on minute details that would not involve a lot of light and shadow – and so, the pieces would end up having people look down, look up, or look to extreme sides. That way, it was easier to fade the focus as well as to hide my insecurities as a blossoming watercolor artist.

There were some works that I attempted to do relatively “ok” human faces. That, to me, is a little justification of my “will I” or “won’t I” get it over with mentality. But I was not impressed because most pieces looked more cartoony (disproportionate facial elements) rather than humanly as I would want to portray. 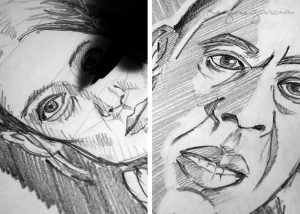 I have come to realize that I could never hide my insecurities in my works. There will come a point that most of the paintings that I will do in the future would only involve secondary human subjects – not because it was my way of expressing a scene, but because I am only limited to have them placed intentionally further aside to avoid “dealing” with the human face problem.

In 2017, just last year, I made fewer artworks. It was then that I realized that I have to do something with my problem with faces (come three years after not addressing it in the first place). And even though it’s pretty convenient to search in the internet these days on the “how to’s” of most things, I did not go into that direction as I wanted to experience everything at my pace, at my own discovery, at my own mistakes. That’s how I usually learn and of course, the old-fashioned physical books that range from color theories to the science of light and shadow.

The feeling of having a pause at painting rural scenes to just focusing on the sheer basics of drawing, shading, and getting those facial elements right, was enlightening. Almost, in a way, a meditative process. I learned how to be extremely patient and how to respond to failed undertakings optimistically. 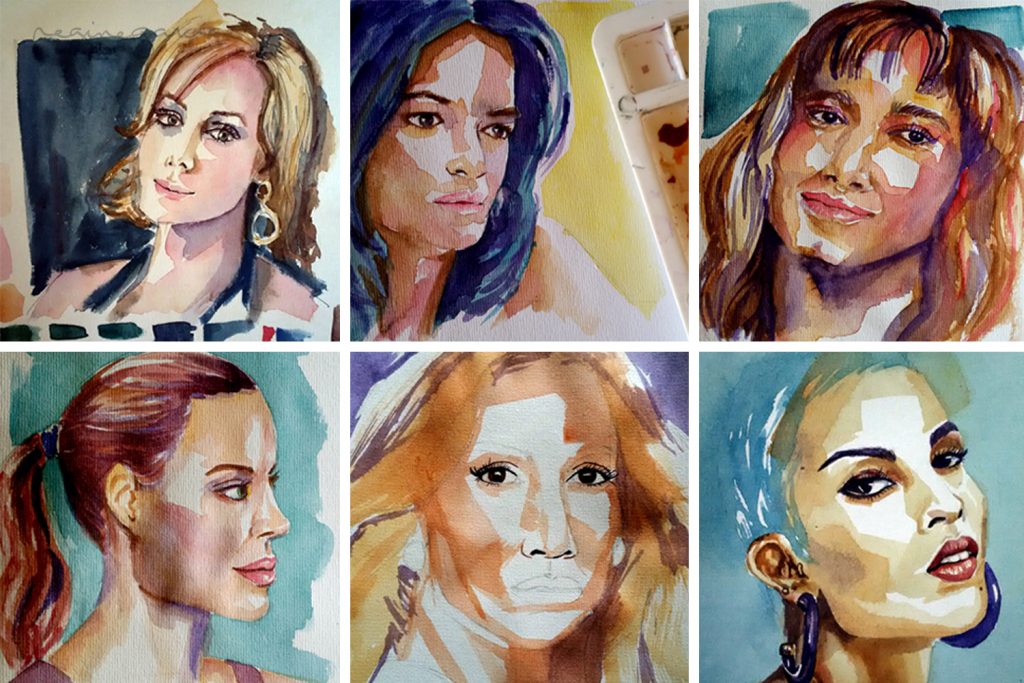 They say you can only improve if you keep on practicing. As old as that saying was, it is universally effective in helping me take a little step up the ladder.

Looking back at that 2014 painting, and looking back at my arrogant, impatient self, I am very glad that I never really threw away my hopes after those evident failures. If I did gave up on watercolor or portraiture, I would not have landed myself this far in my passion.

And to those who have experienced that similar “frustration” over a creative venture, it is better to confront it rather than to leave it be. Frustrations could always turn into wonderful works of art and it took me three years to finally overcome my fear of doing faces. It’s not something to be ashamed about – at least, that’s what I have learned. 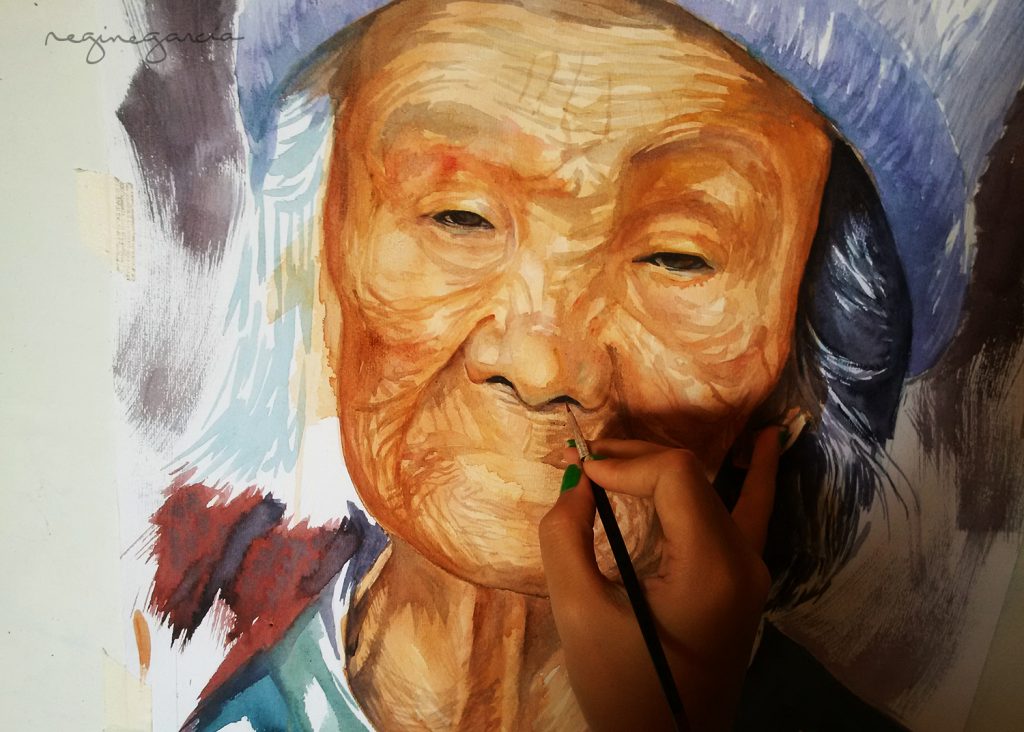 I look forward to producing more works this year.

This site uses Akismet to reduce spam. Learn how your comment data is processed.